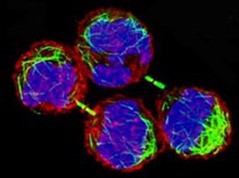 Cell division is required for the propagation of all living things. A critical phase of cell division occurs just after segregation of the duplicated genome, when the chromosomes, cytoplasm and organelles are partitioned to two daughter cells in a process termed cytokinesis. In animal cells, cytokinesis is driven by a cortical contraction that physically pinches the cell into two, and requires coordination of the mitotic spindle, actin cytoskeleton and plasma membrane. Failures in cytokinesis can cause cell death and age-related disorders, or lead to a genome amplification characteristic of many cancers. Although cytokinesis has been studied for over 125 years, little is known about the molecular factors and mechanisms involved. We are particularly interested in understanding how the cleavage furrow is established, how the completion of cytokinesis is achieved and what roles the spindle midzone and midbody play in cell division. My laboratory integrates multiple approaches in both mammalian and C. elegans systems to identify and characterize conserved factors, taking advantage of proteomics, functional genomics, genetics, cell biology and video-microscopy techniques.

We are currently characterizing the function of an RNA Binding Protein, ATX-2/Ataxin-2, in cytokinesis. When mutated in humans, leads to neurodegenerative disease. We are also looking into the role of midbody associated mRNAs in cytokinesis and their post-mitotic function.

Our lab recently identified that the conserved RNA-Binding Protein (RBP), ATX-2, regulates cytokinesis by regulating the targeting of ZEN-4 to the spindle midzone through a conserved translation regulator, PAR-5/14-3-3sigma (Gnazzo, et al, 2016).

​Cell polarity is crucial for generating diversity throughout development.  In the C. elegans embryo, polarity is determined by opposing PAR protein complexes that create distinct anterior and posterior domains. Actin dynamics are also critical for establishing and maintaining both cortical and cytoplasmic differences.  Current models for the role of PAR proteins in polarity suggest that PAR-dependent membrane recycling is required to generate or possibly maintain a plasma membrane domain and boundary, yet the links between the PAR proteins, endocytic machinery and the actin cytoskeleton during development have not been made. We are currently trying to identify factors that play a key role in maintaining polarity factors in a fluid and dynamic membrane throughout development.  Factors that regulate cell polarity are important for the development of all organisms, tissues and stem cells and identifying proteins that maintain polarized distributions in specific membrane domains are enormously important for our understanding of diverse developmental events.

We identified Dynamin/DYN-1 as playing a necessary role in the maintenance of anterior cell polarity (Nakayama, Shivas, et al, 2009).

We have identified the Arp2/3 complex as a factor necessary for early endosome dynamics and the maintenace of PAR asymmetry (Shivas & Skop, 2012).